As some of you might have noticed I haven't blogged for a while...

It was a pretty busy week last week so I couldn't find the time and the energy to post something. It was a pretty interesting week though (well wednesday was interesting, the rest of the week wasn't anything special).Wednesday I went to Amsterdam with Loe, Pascal and Bob. We went to the University of Amsterdam to see Jeff Waugh talk about Gnome, Ubuntu and everything in between. I must say, a great guy and a great presentation! He talked for approximately two and a half hours but I wasn't bored one single second. It wasn't only informative, it was pretty funny as well (especially Jeff, Martijn and Dennis doing the Badger, Badger, Badger dance :D).

In Amsterdam we made some pretty cool photograph's as well: 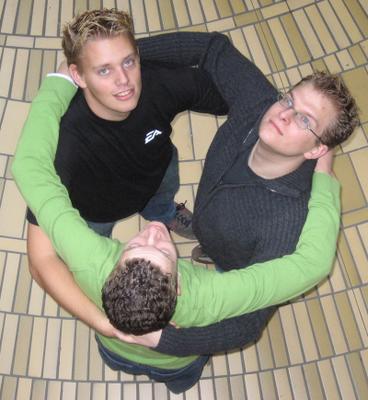 This is me Loe, Bob and me in some kind of mall in Amsterdam. And to answer your question: Yes people were staring! 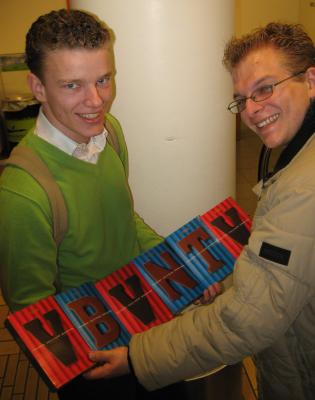 This is Loe and me at the Hema in the same mall trying to spell Ubuntu. Unfortunately, the character 'U' wasn't available (My worries go out to all the Ursula's and Umberto's in this world!). The funniest thing about this picture is probably the people walking by trying to figure out which word we were trying to spell... vbvbvbvvtvvvvv!?!?!?! You should have seen the look on their faces!While typing this blog entry I just checked out Jeff Waugh's blog and found he published a picture he took in the bar afterwards so check it out! Quite funny he linked to Pascal's blog, apparently he is a Ubuntu-NL Planet reader ;).

To sum it all up in Jeff Waugh's own words: "Wednesday was totally rad!".

EDIT: We now know Waugh is pronounced as Wah. It was a productive day indeed ;).