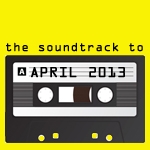 Another month, another Soundtrack by Phil Wilce. If you're interested in new music this series of Spotify playlists are must-listens!

April is fully loaded. 50 live rounds. All hit the bulls-eye.

From the raucous hellfire of Major Lazer and Tyga. To the deadly sniper attack of Misty Miller and Kodaline.

There are carefully picked-off targets from the new albums by Peace, Low, Devendra Banhart and Steve Mason

And a brutal attack from Vision.